QR 678, A Invention By Indian, For Indian 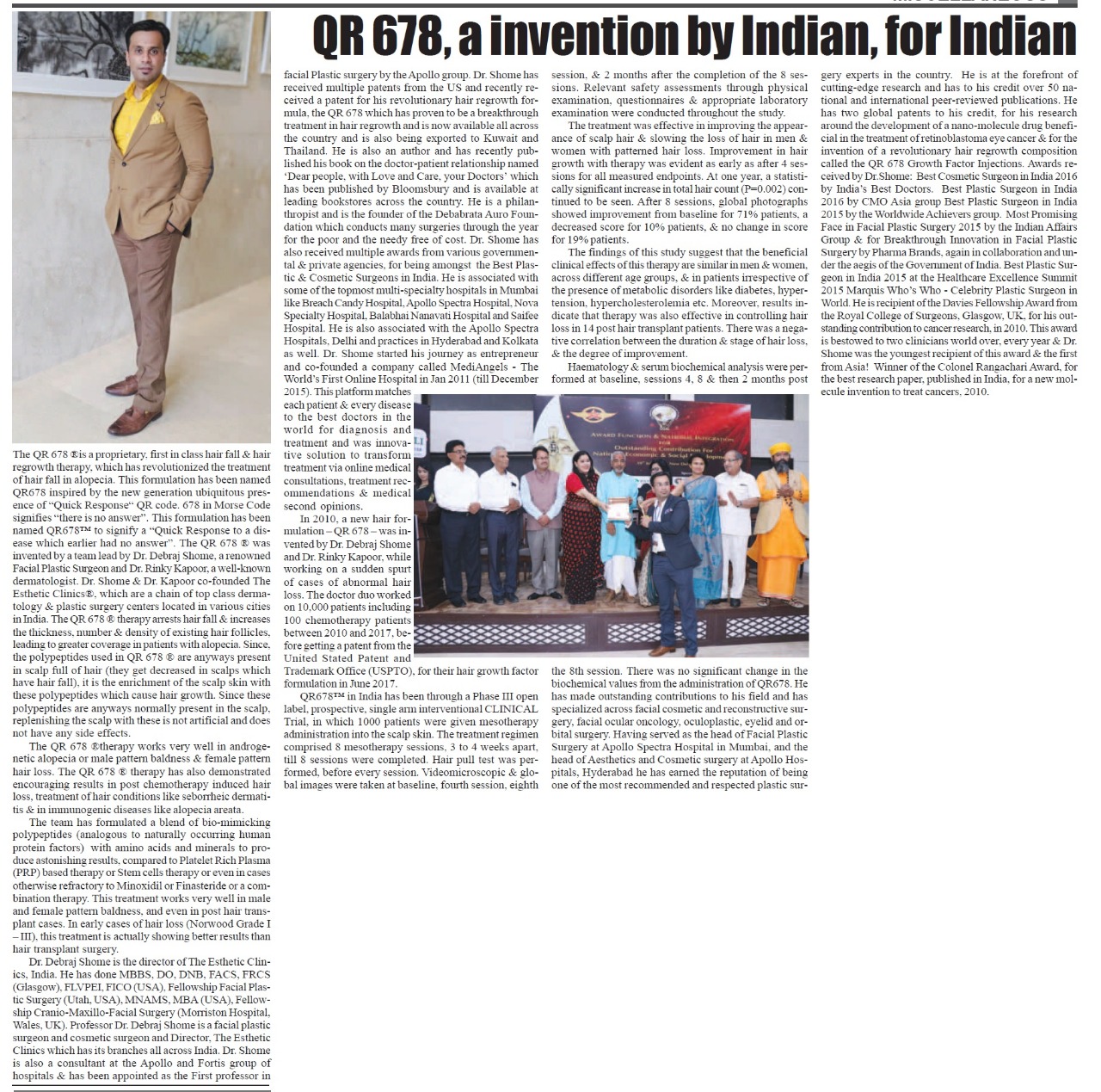 The QR 678 is a proprietary, first in class hair fall & hair regrowth therapy, which has revolutionized that treatment of hair fall in alopecia.  This formulation has been named QR 678 inspired by the new generation ubiquitous presence of “Quick Response” QR code 678 in Morse Code signifies “there is no answer”.  This formulation has been named QR 678 TM to signify a “Quick Response to a disease which earlier had no answer”. The QR 678 was invented by a team lead by Dr Debraj Shome, removed Facial Plastic Surgeon and Dr Rinky Kapoor, a well-known dermatologist.  Dr Shome & Dr Kapoor co-founded. The Esthetic Clinics, which are a chain of topclass dermatology & plastic surgery centres  located in various cities in India.  The QR 678 therapy arrests hair fall & increases the thickness, number & density of existing hair follicles, leading to greater coverage in patient with alopecia. since, the polypeptides used in QR 678 are anyways present scalp full of hair (they get decreased in scalps which have hair fall), it is the enrichment of the scalp skin with these polypeptides which cause hair growth.  Since these polypeptides are anyways normally present in the scalps, replenishing the scalp with these is not artificial and does not have any side effects.

The team has formulated s blend of bio-mimicking polypeptides (analogous to naturally occurring human protein factors) with amino acids and minerals to produce astonishing results, compared to Platelet Rich Plasma (PRP) based therapy or stem cells therapy or even in cases otherwise refractory to Minoxidil or Finasteride or a combination therapy.  The treatment works very well in male and female pattern baldness, and even in post hair transplant cases. In early cases of hair loss (Norwood Grade I-III), this treatment is actually showing better results than hair transplant surgery.

Dr Debraj Shome is the director of The Esthetic Clinics, India. He has done MBBS, DO, DNB, FACS, FRCS (Glasgow), FLVPEL, FICO (USA).  Fellowship Facial Plastic Surgery (Utah, USA), MNAMS, MBA (USA). Fellowship Cranio-MaxillQ-Facial Surgery (Morriton Hospital, Wales, UK).  Professor Dr Debraj Shome is a facial plastic surgeon and cosmetic surgeon and, Director.  The Esthetic Clinics which has its branches all across India Dr Shome is also consultant as the Apollo and Fortis group of hospitals & has been appointed as the First processer in facial Plastic surgery by the Apollo group Dr Shome has received multiple patents from the US and recently received a patent from his revolutionary  hair which has regrowth formula, the QR 678 which has proven to be a breakthrough treatment in hair regrowth and is now available all across the country and it also being exported to Kuwait and Thailand. He is also an author and has recently published his book on the doctor-patient relationship named ‘Dear people, with Love and Care. Your doctors which has been published by Bloomsbury and is available at leading bookstore across the country.  He is a philanthropist and is the founder of the Debabrata Auro Foundation which conducts many surgeries through the year for the poor and the needly free of cost.  Dr Shome has also received multiple awards from various government & private agencies, for being amongst the Best Plastic & Cosmetic Surgeon in India.  He is associated with some of the top most multi-specialty hospitals in Mumbai like Breach Candy Hospital.  Apollo Spectra Hospital, Nova Specialty Hospital, Balabhai Nanavati Hospital and Saifee Hospital.  He is also associated with the Apollo Spectra Hospitals.  Delhi and practise in Hyderabad and Kolkata as well Dr Shome started his journey as entrepreneur and co-founded a company called MediAngels – The World’s First Online Hospital in Jan 2011 (till December 2015).  This platform matches each patient & every disease to the best doctors in the world for diagnosis and treatment and was innovative solution to transform treatment via online medical consultations, treatment recommendations & medical second opinions.

In the 2010, a new hair formulation – QR 678- was invented by Dr Debraj Shome and Dr Rinky Kapoor, while working on a sudden spurt of cases of abnormal hair loss.  The doctor duo worked on 10,000 patient including 100 chemotherapy patients between 2010 and 2017, before getting a patient from the United Stated Patent and Trademark Office (USPTO), for their hair growth factor formulation in June 2017.

QR 678 TM in India has been through a Phase III open label, prospective, single arm interventional CLINICAL Trial, I which 1000 patients were given mesotherapy administration into the scalp skin. The treatment regimen comprised 8 mesotherapy session.  3 to 4 weeks apart till 8 sessions were completed.  Hair pull test was performed before every session.  Videomicroscopic & global image were taken at baseline, fourth session, eighth session, & 2 months after the completion of the 8 session. Relevant safety assessments through physical examination, questionnaires & appropriate laboratory examination were conducted throughout the study.

The treatment was effective in improving the appearance of scalp hair & slowing the loss of hair in men & women with patterned hair loss. Improvement in hair growth with therapy was evident as early as after 4 sessions for all measured endpoints.  At one year, a statistically significant increase in total hair count (P=0.002) continued to be seen.  After 8 sessions, global photographs showed improvement from baseline for 71% patient, a decreased score for 10% patient & no change in score for 19% patients.

The finding of this study suggest that the beneficial clinical effects of this therapy are similar in men & women across different age group. & in patients irrespective of the presence of metabolic disorders like diabetes, hypertension, hypercholesterolemia etc., Moreover, results indicate that therapy was also effective in controlling hair loss in 14 post hair transplant patients.  There was a negative correlation between the duration & stage of hair loss & the degree of improvement.

Haematology & serum biochemical analysis were performed at baseline, session 4, 8 & then 2months post the 8th session.  There was no significant change in the biochemical values from the administration of QR678. He has made outstanding contributions to his field and has specialized across facial cosmetic and reconstructive surgery, facial ocular oncology, oculoplastic, eyelid and orbital surgery. Having served as the head of Facial Plastic Surgery at Apollo Spectra Hospital in Mumbai, and the head of Aesthetics and Cosmetic surgery at Apollo Hospitals.  Hyderabad he has earned the reputation of being one of the most recommended and respected plastic surgery expert in the Country.  He is at the forefront of cutting-edge research and has to his credit over 50 national and international pre-reviewed publications.  He has two global patents to his credit, for his research around the development of a nano-molecule drug beneficial in the treatment of retinoblastoma eye cancer & for the invention of a revolutionary hair regrowth composition called the QR 678 Growth Factor Injections.  Awards received by Dr Shome.  Best Cosmetic Surgeon in India 2016by India’s best Doctors.  Best Plastic Surgeon in India 2016 by CMO Asia Group Best Plastic Surgeon in India 2015 by the Worldwide Achievers group. Most Promising Face in Facial Plastic Surgery 2015 by the Indian Affairs Group & for Breakthrough Innovation in Facial Plastic Surgery by Pharma Brands, again in collaboration and under the aegis of the Government of India.  Best plastic surgeon in India 2015 at the Healthcare Excellence summit 2015 Marquis Who’s Who- celebrity Plastic Surgeon in World.  He is recipient of the Davies Fellowship Award from the Royal College of Surgeons. Glasgow UK, for his outstanding contribution to cancer research in 2010.  This award is bestowed to two clinicians world over every year & Dr. Shome was the youngest recipient of this award & the first from Asia!  Winner of the Colonel Rangachari Award, for the best research paper, published in India, for a new molecule invention to treat cancers, 2010.